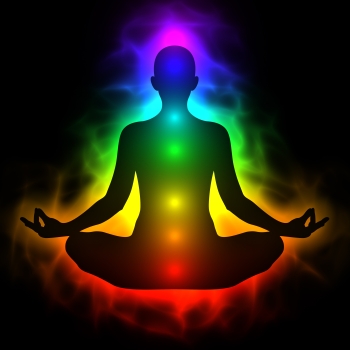 Chakras were first described in the ancient Hindu scriptures, known as The Vedas, which are the earliest Sanskrit literary records originating in India around 1500-500 BC. The Vedas contain wisdom on how to create and maintain balance, and therefore health in body and mind. In Sanskrit, the word “chakra” means wheel. Chakras are depicted as circular vortexes of energy than run along the spine and spiral out from the front and back of each person. Chakras hold “Prana” (pronounced praa-nuh), the healing, life-force energy that infiltrates and surrounds everything.

There are seven chakras and the first, or root chakra, also projects downwards, while the seventh, or crown chakra, also projects upwards out of the head. Each chakra has a color and is connected to an organ of the body and is thought to impact physical, emotional, psychological, and spiritual aspects of wellbeing. When chakras are open and aligned, energy flows freely, facilitating overall health in these four areas. When the chakras are blocked, energy gets stuck and can cause ailments, imbalances, and challenges related to the chakra or chakras in question.

We can use this eastern wisdom as another framework to evaluate and alter our state of wellbeing and add a holistic lens to our view of health. It is now widely accepted that our mental state impacts our physical health. Specifically, thoughts impact feelings and can trigger different chemical responses in the brain that affect the body. For example, high levels of stress cause cortisol to be released in the body, which can be damaging in prolonged states. In addition to thoughts and environmental triggers that create stress and disease, we know that certain foods and lifestyles can cause damage on the body and mind. For example, highly processed and inflammatory foods can impede serotonin production in the gut and actually make anxiety and depression worse.

For some, this idea of mind body connection leaves out an important spiritual, energetic or soul component. Some people are starting to adopt what was long known by ancient healers, that we are all made up of energy, or Prana, and vibrate at different frequencies that can be raised or lowered by internal and external factors. Even our thoughts are energy. Negative thoughts, environments, and unhealthy lifestyles can hinder health by lowering our overall vibration, while positive thinking and healthy lifestyle choices can be used to inspire wellbeing as they raise our vibration. Even more, it is thought by some that you attract into your life people and things that are operating on a similar vibration as you. Put out positivity and you are more likely to get that in return. Aligning your chakras and raising your vibration aligns you with the flow of universal energy, allowing you to more easily identify and act in accordance with your true purpose and higher self.

It is important to note that encouraging positive thinking does not mean negating or ignoring the difficult emotions we feel that can lower our vibration. Anger, for example, can be an appropriate response to injustice or abuse, and feelings like overwhelm, frustration or apprehension can be signs that we need to make changes to our environments to encourage health and balance. Processing and expressing what are sometimes deemed as negative emotions is the way to let their heavy energy flow through you and transform. You must feel your feelings, when you feel safe and ready to do so, to let them pass. It is only when we get stuck in those emotions, unable to process, express and release them in productive ways, that they become sources for imbalance and illness. Sometimes past traumas create negative mindsets that we must learn to undo to find peace. The thinking and behaviors that were once an adaptive form of self protection must be explored and challenged when they no longer serve us.

No matter what lens you choose to view health from, we can at least agree on the power of intentional thought and behavior in impacting wellbeing. This article, The Chakras Explained, will give you a brief description of each chakra, while future tips will go into more detail on how to use chakra wisdom for your benefit by being able to tell when they are blocked or out of balance and will offer several suggestions on how to raise the vibration of each chakra to create balance again.

The root chakra is red and located at the base of the spine, by the sacrum on the back and pubic bone in the front. In addition to projecting outwards from your front and backside, the energy of this chakra also shoots down into the earth and roots you to the ground. It is the chakra of survival and stability, self preservation and grounding. It represents the sex organs (penis and vagina) and legs. It deals with our physical, worldly needs and can be the base of fear.

The sacral chakra is orange and located right below the navel on the front of your body and on your lower back on the backside. It deals with sensuality and sexual desire. Important organs associated with it are spleen and kidneys as well as the reproductive organs. On a deeper level it relates to intimacy and letting go.

The solar plexus chakra is yellow and located below the ribs near the stomach and diaphragm on the front and on the other side is found below shoulder blades or mid-back. It gives you energy and vitality, inner strength, purpose, willpower and self control. It manages the stomach, liver, gallbladder and small intestines. It also houses anger.

The heart chakra is green and is located in the center of the chest on the front and in between the shoulder blades on the back. It represents love, balance and connection. It governs the lungs, lymph and immune system, blood pressure and circulation. It fosters self esteem, forgiveness, sharing and trust.

The throat chakra is blue and located at the base of the neck, and on the back where your neck connects to your shoulders. It deals with speech and expression, healing and creativity. It is the chakra of the parathyroid and sinuses. It allows for expression of feelings, openness, and communication.

The third eye chakra is indigo and located on the forehead between the eyes on the front, and goes out towards the center of your head in back. It is the chakra of awareness, intuition and understanding. It represents the endocrine, autonomic nervous system, and hypothalamus. It provides access to clairvoyance when tapped into.

The crown chakra is violet or white and located at the top of the head and also propels energy upwards as it connects you to the divine. It represents enlightenment and transcendence, spiritual understanding, connection, inspiration and wisdom. It controls the central nervous system, head and upper spine. It is the chakra for experiencing consciousness and cosmic love.

If you’re intrigued by this ancient Hindu wisdom and would like support in implementing chakra work into your mental or physical health routine, please call 267-428-2615 to set up a therapy session at your convenience.