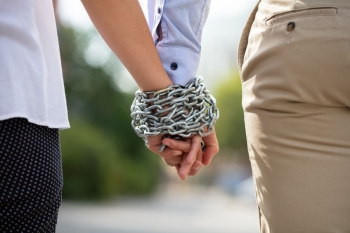 Have you ever given your all to a relationship, sacrificing your own beliefs, feelings, and needs to benefit another? You may be struggling with codependency. Codependency develops from childhood schemas, or maladaptive thought patterns that form due to experiences with others, especially parents and early relationships. Jeffrey Young, PhD, the founder of schema therapy, identified 18 maladaptive schemas that present in adulthood. Certain thought patterns may form signs of codependency in adulthood. Often times, codependent partners remain with abusive partners, subconsciously enabling their behavior because of childhood schemas. Once these codependent thought patterns are identified, you can begin to reverse these schemas.

Here is a look into which schemas may be dictating your behavior:

Abandonment/instability: This thought pattern is the feeling of instability and abandonment, associated with the notion that a significant other will not be able to support the individual. This often accompanies thoughts that a significant other will leave to be with someone else who is “superior”. When a person is struggling with codependency, a person may tolerate an abusive partner because they are afraid to lose their loved one and be alone.

Defectiveness/shame: The individual develops the feeling of being unwanted, inferior and/or defective. This thought pattern involves the idea that if a person were to be “exposed” for their true self, people would find them unlovable. A person struggling with codependency could stay with their partner and tolerate abuse, because they feed into the notion that they are “defective” or “inferior” and deserve this treatment.

Dependence/incompetence: The belief that someone is not capable of handling basic daily responsibilities without significant help from others. This may manifest into the inability to take care of oneself without seeking guidance from others. Someone suffering from this thought pattern may find themselves unable to leave a toxic relationship for fear or inability to be self-sufficient.

Enmeshment/undeveloped self: This involves being so connected to another individual (such as a parent), that a person forgoes their own sense of identity and development. This often accompanies feeling smothered, having a lack of direction, and questioning their existence. Along with the dependence/incompetence schema, a person may have the inability to take care of oneself, so they will remain in an unhealthy relationship to keep the “identity” they are comfortable with. This is especially true when an enabler loses their sense of self to care for a narcissist, or a loved one who is struggling with substance abuse.

Failure: This toxic thought pattern is the feeling that you have failed, or will fail, and struggling with thoughts that you are inadequate and inferior to others in achievement. This thought pattern goes along with the defectiveness/shame schema.

Subjugation: This schema involves giving up your control to please others, in an effort to avoid arguments and abandonment. This may occur in addition to the idea that your thoughts and needs don’t matter and are invalid. By surrendering your control, you attempt to give to others while also feeling trapped. This is very common in codependent individuals in a relationship with a self-centered narcissist. By surrendering your control, you are pleasing your defensive partner, and thus avoiding any uncomfortable arguments.

Self-sacrifice: This is the process of meeting the needs of others at the expense of a person’s own wants and needs. The reason for doing so could form from feeling guilty about being selfish or not wanting to cause anyone pain. By continuing to put the needs of others over their own, that individual could face feeling resentment towards others for the acts they have done voluntarily. This thought pattern could be seen when an individual is enabling a substance abuser. They may often feel guilty of putting their needs first in order to help their loved one who is struggling.

Approval seeking/recognition seeking: This belief is when a person relies on getting attention and approval from others. The individual often times connects their self-esteem to how others view them, and may try to over emphasize their status, finances, and power. The idea is to gain approval over just gaining the power itself. This may be a thought pattern codependent individuals struggle with, because they need to gain approval and acceptance from their abusive pattern in order to feel worthy of love.

Emotional inhibition: This schema is when a person will bottle up their emotions and communication because they are afraid that if they express themselves they will be met with rejection and disapproval. Often times the person will hide their anger, and even happiness, to avoid being vulnerable. This thought pattern goes along with the theme of surrendering yourself to please others.

Unrelenting standards: This thought pattern is defined by the idea that a person needs to meet high standards in order to avoid criticism. This belief will subsequently create pressure for the individual, presenting as perfectionism, rigidness, and hypercriticalness. A codependent individual may work hard to prove themselves worthy of a relationship, as well as avoid negative reactions from their partner.

Did any of these schemas resonate with you? Did more than one? Take a moment to envision where these thought patterns may have come from. Many of the examples used referred to how these thought patterns could lead someone into an abusive or unhealthy relationship, however these schemas can present themselves in other ways. For example, you could find these thought patterns emerging from interactions with family members, authority figures (such as a boss), or friendships. If you notice these patterns in your own life and are struggling to identify the origins, and/or need help with coping strategies to form healthy thought patterns, The Center for Growth can help. If you don’t live in the Philadelphia area, some of our therapist also do telephone counseling. To schedule an appointment call 267 324 9564.