What is Body Dysmorphic Disorder? | Center for Growth Therapy 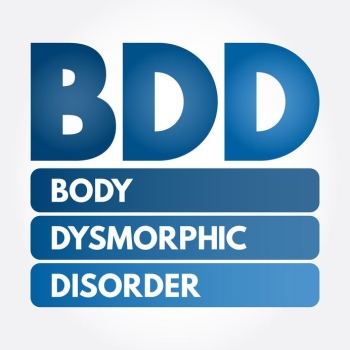 Body Dysmorphic Disorder (BDD) is a severe preoccupation with one or more aspects of one’s appearance. People with body dysmorphic disorder ( BDD) believe that specific physical aspects of their body are defective, which causes the individual to view his/her appearance as ugly or abnormal. There are different levels of severity of body dysmorphic disorder ( BDD ), from mild, to severe, to even life-threatening. The identified flaw(s) is often imagined or distorted.

Features of preoccupation vary with each person, some are preoccupied with their nose, legs, genitals, hair, complexion, etc. Some may even have more than one area of preoccupation. Body Dysmorphic Disorder (BDD) is a very distressing and time consuming disorder, and because of this, it causes significant impairment in one’s functioning (social, occupational, etc.). Individuals with Body Dysmorphic Disorder ( BDD) can be so distressed about their concerns of their appearance, that their relationships suffer.

BDD is a treatable medical problem. The first line of treatment is mental health therapy. Therapy services are available in Center City Philadelphia. It is important you choose a therapist with a specialty in this area. Not all therapists are trained to treat this issue. Cognitive behavioral therapy is also recognized as an effective mode of treatment, and is the first choice of psychotherapy for BDD. Cognitive behavioral therapy helps individuals learn alternative and effective coping skills to substitute for the compulsive behaviors, as well as to better manage anxiety producing situations. In conjunction with therapy, medication may be appropriate. SRIs or SSRIs (serotonin-reuptake inhibitors or selective serotonin-reuptake inhibitors) are proven to be most effective if medications are needed. This type of antidepressant in combination with therapy helps decrease obsessive thoughts, and compulsive repetitive behaviors, as well as decreasing depression and anxiety. Often, a mental health therapist works closely with the psychiatrist who is providing medication management.

To help give you a better understanding of common cases regarding BDD, the following are two case examples of individuals presenting with BDD, and how they were treated.

Kim, a 38 year old female living in Center City Philadelphia had been fixated on appearance of her teeth for the past ten years. Kim believed her teeth were severely crooked, with large spaces in between her front teeth. Kim had been told by a number of orthodontists and dentists that she is not an ideal candidate for braces, or any other orthodontic procedures. Kim engaged in a number of common BDD rituals which were time consuming and triggering: Constantly checking mirrors to examine her teeth, reassurance-seeking, information seeking, doctor shopping, buying countless products to improve her teeth, etc. Kim believed no one would find her attractive as long as her teeth are crooked. Kim had not dated anyone in about five years, and when there is someone of interest she becomes fixated on the idea that her does not find her attractive because of her teeth. Kim would experience social anxiety, especially in large crowds, anywhere from 3-5 times per week. Kim would often stay home to avoid feeling triggered. Kim struggled to maintain ongoing, full-time employment because she is often absent from work when her BDD intensifies, and finds full-time employment to be emotionally and physically exhausting. Kim was been hospitalized twice in the past ten years, after trying to fix her teeth herself with kitchen utensils. When triggered by her BDD, Kim is unable to focus on or discuss anything other than her teeth, and what to do about it.

As for treatment, Kim began psychotherapy in Philadelphia to learn cognitive behavioral therapy techniques. Kim wanted to reduce her BDD symptoms in order to improve her social life and career. Kim’s therapy consisted of identifying and reducing her rituals, such as lowering the amount of mirror checking from 30 minutes a day to just minutes a day. As well as completely cutting out her ritual of searching the internet for new products and new procedure options. Kim learned to track her BDD related thoughts in order to identify and correct distorted thinking. Through tracking and the use of psychotherapy to process, Kim learned that fear of social situations, and her practice of rituals triggered her negative thoughts about her appearance. Kim began to find ways to reduce exposure to these triggers, and developed coping skills for when triggered (positive self-talk, engaging in healthy activities like volunteering and running, and relaxation techniques like deep breathing). Kim learned how identify her negative thinking and replace these thoughts with more positive/rational thoughts. Six months into treatment, Kim’s symptoms were significantly reduced. She felt much calmer around people and less self-conscious. In time, Kim decided to return to working by first committing to a volunteer job 15 hours a week. As Kim’s progress improved, she began to gain confidence in public places and at her volunteer job, she was then able to increase her hours. Kim is now applying for part-time paid positions. Kim reported to have only one negative thought about once a day and found she was able to cope with the thought through identifying her negative thinking process, and developing a more rational, positive response. Kim was able to successfully apply skills learned in therapy on her own when triggered. Kim learned the difference and the impact between rational and irrational thoughts.

Kevin, 25 living in Center City Philadelphia had fixated on his hair for as long as he could remember. He often worried his hair was thinning to the point of developing bald patches. Kevin would spend hours at the mirror checking to see if his hair had become thinner. Kevin would spend hours researching on the latest products and procedures to give him a fuller head of hair. Kevin was often late for work, appointments, social functions because he would be spending so much time trying to get his hair just right to make it appear full. Kevin often isolated himself from his friends because he was ashamed of how he looked, he was also ashamed to let others know how fixated he was on his hair. Kevin often overly relied on the support of his wife, Tracy who would often get the brunt of Kevin’s negative reactions to his triggers. When Kevin was triggered by his BDD, he would often respond by acting out: yelling, making demands/pleas for help to fix his hair, even at times Kevin would push over a lamp, or slam a door out of emotional pain and frustration.

Kevin had tried various treatment options in Philadelphia over the years: cognitive behavioral therapy, SRIs, hypnotherapy, etc. Kevin did not believe his symptoms improved when in cognitive behavioral therapy, and did not find past SRIs to be effective. Kevin decided to try SSRIs again. After one month of being on a new SRI, and after adjusting the dosage with the help of his psychiatrist, Kevin reported his thoughts and fixations to be less time consuming and less exhausting. Kevin decided with having more energy and focus, to reconsider cognitive behavioral therapy. Two months after returning to cognitive behavioral therapy Kevin found he had more energy and self control to resist urges to practice his usual rituals. Kevin’s therapist worked with Tracy to change her approach to Kevin’s outbursts, by not engaging in his pleas or making empty promises to help him calm down. Tracy was taught to disengage with Kevin when his negative thoughts lead to more aggressive behavior. While Tracy stopped feeding into Kevin’s outbursts, Kevin began to try other ways to cope when triggered by his BDD: journaling, writing out his triggers and thoughts, turning to healthier activities in replacement of obsessing bout his hair and checking the top of his head. Kevin learned to identify his common negative thinking errors, as well as where he is most triggered. Kevin stated that after he began to identify his common negative thinking patterns, as well as his common distortions, he was soon able to learn to develop alternative thoughts in response to his negative thinking. Kevin’s therapist gradually worked with Kevin on exposure exercises, where Kevin would plan and prepare to put himself in a triggering situation, for example Kevin’s most triggering situation was getting his hair cut. Kevin learned a step by step process where he organized his thoughts, plan, fears, and goals when entering in a triggering situation. After the exposure, Kevin would process the experience with his therapist, comparing his original fears to the reality of the situation that took place. After engaging in this exposure exercise approximately five to seven times, Kevin learned that the outcome of his feared situation was never as severe as he initially anticipated. Kevin continued to use these steps and process in triggering situations until his anxiety anticipating these events gradually decreased. Kevin reports after six months of cognitive behavioral therapy with the combination of SRIs, he has found himself isolating less, relying on mirrors less, spending less time trying to fix his hair, and gradually cut down on touching/fixing his hair. Kevin also reported through the exposure practice he learned that other people didn’t seem to notice or care about his hair. Kevin no longer seeks reassurance about his appearance from his wife or from others.

These are just two examples of the many approaches to BDD treatment, as well as just two of the many outcomes of BDD treatment. It’s important to tailor treatment to fit your own needs. The exact therapeutic strategies will vary from person to person and from situation to situation. As these two case examples demonstrate each individual will have different treatment needs, and their outcomes will differ. Depending on the severity of symptoms as well as other factors, medication may be effective enough for treatment, or cognitive behavioral therapy will be effective on it’s own, and for others a combination of the two will be necessary. Treatment for BDD takes time, there is not a set time-line or road-map for anyone. The body needs time to adjust to medications, and sometimes changes to the medication or dosage will be needed. Again, time is needed to assess how your body and mind respond to the different approaches, but the more you try, the more information you will have to figure out what works best for you.

Keep in mind, that the level of treatment will depend on the severity of your BDD and symptoms. For more severe your symptoms, the more intensive level care you will need. There are outpatient, inpatient, residential and partial hospital treatment options available depending on the level of severity . If you are unsure as to what type of treatment is most appropriate for you, call today to speak with one of our therapists in Center City Philadelphia. Help from one of our counselors at The Center for Growth / Body Dysmorphic Disorder Therapy is available. 267-324-9564.