How To Share Your Shame In Therapy | Center for Growth Therapy 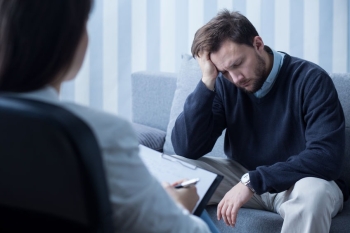 Shame can come when we least expect it and wear on us. If we cannot talk about our shame it will continue to hold us back even when we are receiving proper treatment Where guilt tends to define our behavior, shame defines our self-worth. Shame has three parts to it: the belief that others know or will discover something culpable about us and therefore disapprove of us in some way. This belief turns into an agreement that others’ disapproval is appropriate and correct, which leads into the [subconscious] choice to cooperate with those that disapprove by causing pain through self-disapproval.

In working through shame in the therapy room, you must first work to understand what you have implemented as a protective barrier to feeling your shame. Contempt toward others is a common protective barrier to cover up your own inner shame. The contempt comes from begrudgingly and subconsciously agreeing with the disapproval you feel. Chances are that you may feel contempt toward your family and/or friends, and possibly even your therapist. Can you articulate why you are feeling contempt? Ask yourself, is your contempt for these people coming from them getting too close to what is truly bothering you at your core? Is it easier to keep people at a distance, rather than acknowledging and working through the pain that is inside of you? If this is the case, challenge yourself to push through the discomfort and hurtful pain.

When you are feeling contempt toward your family, friends, or therapist, you may also take a defensive role. You might find that you become annoyed easily, or that you tend to deny certain issues that come up in your life, or in the session. Test yourself to go beyond these behaviors. Ask yourself, what am I getting defensive of? How might I overcome these defenses? What am I hiding? Am I getting annoyed easily because something is going on for me? Am I feeling insecure?

Have your therapist work for you; ask her to point out to you when you are partaking in shaming behaviors. This process will help you to recognize behaviors such as talking down to yourself, having a short temper with others, denying your own feelings as they are happening. It is easier to work through fear, insecurity, sadness, guilt, or shame as it is happening in the moment, rather than later.

Understand that your therapist is there to work for you and to be helpful. The goal of the therapist is to offer you a healthy, unbiased perspective of your situation. She is also there to help guide you through processing these feelings of shame and working to understand them better. Her job is to reflect back the situation so that you can see yourself and your actions as others might. Your therapist can help you take steps that will allow you to feel less shameful, freeing you to experience healthier interactions with your friends and family, and feel more positive.

Anger and contempt may be prominent in your therapy sessions. These feelings of contempt and anger toward your therapist make it difficult for you to believe that she is there to help you. Understand that she is there to push you out of your comfort zone in order to better recognize areas of your life where you are feeling shameful. If you find yourself taking what the therapist is saying and making your own interpretations in a condescending way back to the therapist, do you really believe what you are saying or, are you masking the unworthiness you feel from what the therapist is pointing out to you?

To help you recognize the difference, look at these two examples:

Unhealthy interaction between client and therapist- Shane has come to see his therapist because he is having issues maintaining employment, which has started to create turmoil in his relationship with his long-term girlfriend. He has worked for temp agencies with no return on permanent positions. He has applied to several permanent positions, with no callbacks. Shane is now working in a retail store part-time to make ends meet. Shane’s girlfriend has been in her position for over 2-years. She currently is the main breadwinner in their relationship and pays the majority of the bills. Shane has struggled to make payments to the therapist in the past, and embarrassingly has asked for a reduction in his fee. Shane and the therapist begin to explore Shane’s social scripts and how he sees the world at large. Shane comes from a traditional; two parent home where his father was the main breadwinner. Shane cannot remember a time that his family struggled with money. Therapist pointed out Shane’s upbringing and wondered if he felt shameful that he was not living up to the male breadwinner role, his father set for as an example. Shane became defensive and pointed out that the therapist was only bringing this up because she is disappointed she has to lower her fee. Shane also pointed out he is a “new aged thinker, where women should be allowed to be a male’s equal.”

Healthy interaction between client and therapist- Shane becomes intrinsic with the question about how his father’s role modeling affected him. He begins to ask himself about what his expectations are of himself as a man in our society, as a boyfriend, as a son, etc. Shane sits with the disconnect between his desire for women and men to be equal, especially in his relationship, and the social script that has been ingrained in him growing up, through what his parents modeled for him. By exploring this disconnect with the therapist, and going deeper than his anger, Shane has given himself the opportunity to understand shame as an emotion and identified the broken script in his head of “I’m not a good enough man.”

Here is an example of the same dynamic between the client and the therapist, with a more intense topic.

Unhealthy interaction between client and therapist- Roger has come to see his therapist because he is having sexualized feelings toward his sister. As the therapist is helping him explore how this attraction works and how it shapes his world, Roger’s therapist wondered if Roger’s attraction to his sister affected his ability to make connections with other people. Roger becomes very defensive and reports to the therapist that the fact that he feels attraction toward his sister has nothing to do with his inability to create healthy relationships with women outside of his family. Roger then stated that the therapist made him mad for even thinking that it would be connected.

Healthy interaction between client and therapist- Roger decides to ask the therapist more questions in order to explore more how his attraction to his sister might be interrupting his ability to create healthy relationships with women outside of his family. Roger is able to explore the disapproval of his family if they found out he had feelings for his sister. This exploration leads into his disapproval in himself and therefore not worthy of relationships outside of his family.

Sometimes, what the therapist reflects back to you may be difficult to think about as it touches at your core, which is where you feel shame. Work to not mask those feelings, but instead deal with them head on. To overcome shame, you as a client have to trust the therapist. If trust is there, then you can ask the therapist to better explain their statement. Over time, you will find that you will feel more enlightened and start to trust yourself to explore another person’s thought process and not take it on intrinsically.

In the above examples the unhealthy interaction showed Shane and Roger blocking any feelings they may have about their life circumstances. They were unwilling to address the issue and even got angry at the therapist for bringing it up. In the second example, Shane and Roger were open to exploring their feelings about an important issue in their life. Through their willingness to explore, Shane was able to see he didn’t feel good enough. Roger was able to see that he did not feel worthy of healthy relationships. The therapist can now start to help Shane work on feeling good enough, and Roger feeling worthiness.

Tell your therapist when you are feeling these emotions so that you can process them within that session as they are happening. Your therapist is only as helpful as you let her be. The more honest, candid and vulnerable you can allow yourself to be, the more she will be able to give you feedback. This will be uncomfortable. By allowing yourself out of your comfort zone, you are allowing yourself to grow.

The speak with a shame therapist call 215 922 5683 x 100. We have offices in Philadelphia PA, Ocean City NJ, Mechanicsville VA and Santa Fe NM