OCD as a Superpower | Center for Growth Therapy

OCD as a Superpower 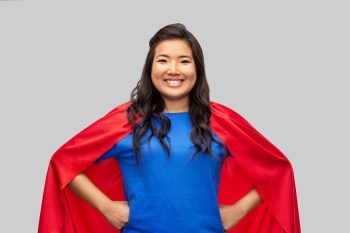 Many people focus on the down sides of Obsessive Compulsive Disorder (OCD), but the truth is that the OCD brain is often creative, detail-oriented, conscientious, persistent, and determined. It is important to remember that these strengths can in fact cause suffering, and this tip is not meant to minimize that pain or glamorize the very real and pervasive condition of OCD. Rather, this tip aims to explore an alternate perspective in order to give people with OCD the motivation and strength to harness their natural abilities. This tip will focus on the strengths of OCD as a way of shifting the narrative from resistance of OCD toward acceptance of OCD. This paradigm shift may help reduce suffering and increase the possibility of creating a life full of purpose.

The tendency for people with OCD to think of worst case scenarios indicates a level of creativity. That is, when people imagine scenarios that are not currently happening, they engage in a form of creative thinking. This is a common experience for those who struggle with OCD. Because people with OCD tend to think about all possible scenarios, this allows them to be imaginative and resourceful, whether it be through creating an original painting or finding a solution for an engineering issue. This creativity, when harnessed healthily, allows the person with OCD to contribute to the world in a meaningful way.

There is no doubt that someone with OCD hones in on meticulous details. This attention to detail allows people with OCD to complete tasks or manage projects with a high level of accuracy and effectiveness. Though this can be the downfall of someone with OCD, it can also be the unique quality that allows them to plan events or organize tasks. People with OCD tend to be highly successful in their careers and fields of study, as they are able to recognize important details that others might gloss over. The part of the OCD brain that makes someone fixate on an idea or thought, when directed in a healthy way, can allow someone to be reliable and thorough, which makes them a valuable asset in their relationships, personal lives, and careers.

People with OCD tend to be empathetic toward other peoples’ feelings, and often are very thoughtful. This makes them a positive asset in a group setting, and is part of what makes spaces like support groups so powerful and healing for people with OCD. When someone with OCD has learned how to use their conscientiousness in a healthy and adaptive way, they often make reliable and kind partners, good listeners, and loving friends. They are able to do a lot of good for the world, because they are so acutely aware of the needs and feelings of those around them.

People with OCD tend to be very persistent in achieving their goals. The same drive that someone has toward completing a compulsion, when directed toward more meaningful goals, will allow them the ability to stick with a task, even when it feels adverse or difficult. This persistence can be what makes someone with OCD a loyal parent, colleague, or friend, and it is also what makes them highly successful in achieving their personal goals. The natural persistence someone with OCD has can be such a strength, when directed toward health and well-being, rather than completing a compulsion.

Similar to persistence, determination is another trait often found in people with OCD. Determination is different in that it is the driving force behind someone’s desire to complete a goal. The sense of “I am going to do this thing even if it is hard”, is what is needed in order for someone to be persistent. Again, the same steadfastness that is found in someone when they feel determined to complete a compulsion in order to gain certainty, can be repurposed in someone with OCD to fuel their completion of more useful tasks or goals.

For instance, someone with OCD might be determined to learn about a new hobby like playing the guitar. The persistence needed in order to carry out all elements of that process like finding lessons, purchasing the instrument, and practicing regularly might come naturally for someone with OCD. Determination to complete a goal from start to finish can be directed toward goals that are valuable, like learning to play the guitar. This is not to say that people without OCD are not capable of completing such goals. However, the determination of someone with OCD in carrying out all the details of this process is important to acknowledge.

In all, considering the strengths of someone with OCD is a way to shift the narrative about having OCD, and how it impacts someone’s life. OCD can be debilitating and it is important to make sure its negative functions are being treated through an evidence-based approach in addition to focusing on the beneficial traits someone with OCD has.

Our OCD Therapists can help you acknowledge both the strengths and costs of OCD. Call our OCD therapists at 215-922-5683 x 100 to schedule with an OCD Therapist today. The Center for Growth is also proud to offer an OCD support group, where you can meet others who experience OCD and gain skills needed to manage your diagnosis more effectively. We offer therapy in Philadelphia, PA, Ocean City, NJ, Richmond, VA, and Santa Fe, NM. We also offer virtual therapy in Georgia and Florida as well.