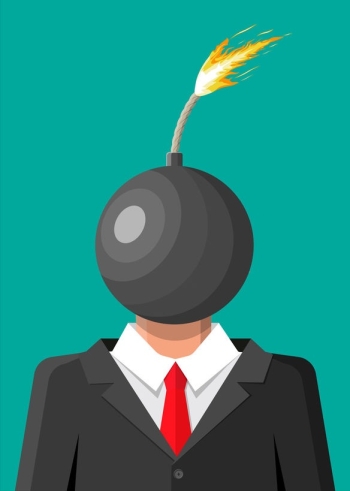 If your anger was a bomb going off, lighting the fuse would be a trigger. People experience triggers to their emotions all of the time. However, in your everyday life you may not realize what these triggers are or the series of events that build up before the bomb goes off. This is a tip that will help you use the imagery of a bomb to better understand the triggers to your anger. Going through the following questions, make a list of your answers.

It is more beneficial to backtrack and observe your fuse having been lit once your bomb has been detonated. Imagine you are meeting up with your significant other driving to get lunch. Suddenly you catch yourself in a fight calling them names and screaming curse words at each other. You feel so angry that things could get physical. This is your bomb is going off. Now, back track to think about when and where you picked up the bomb in the first place.

At this point, you have a lot more self awareness around what is triggering your anger. You can read the leading questions from the example above and put yourself in the situation. Understand that there are often little triggers or multiple events that all combine to set off your bomb. If you still struggle to understand how to learn more effective ways to defuse your bomb and begin to improve your quality of life and relationships, see our other anger management tips or call Center for Growth for a consultation today.